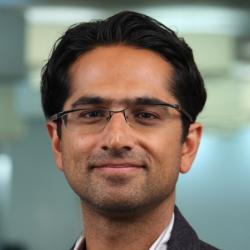 Hasan Bakhshi leads Nesta's creative and digital economy policy and research.  Prior to Nesta, Hasan worked as Executive Director and Senior International Economist at Lehman Brothers, and as Deputy Chief Economist at the Foreign and Commonwealth Office. He has eight years experience as an economist at the Bank of England. Hasan has published widely in academic journals and policy publications on topics ranging from economic growth to the economics of the creative and cultural sector.

His recent work includes an application of a randomised controlled trial in industrial policy and a quasi-field experiment in the performing arts. Hasan has a BA in Economics from Cambridge and an MPhil in Economics from the University of Oxford. Hasan is Adjunct Professor at the Queensland University of Technology and a member of the government’s Creative Industries Council.