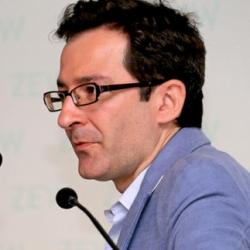 Professor Comin has published multiple articles in top economic journals on the topics of business cycles, technology diffusion and economic growth. He has also authored cases studies published in the book Drivers of Competitiveness. Comin’s research has been supported by the Gates foundation, the National Science Foundation, the C.V. Star Foundation, and the Zentrum für Europäische Wirtschaftsforschung (ZEW). Comin has advised the Prime Minister of Malaysia on its development strategies and has consulted for the ECB, World Bank, IMF, Federal Reserve Bank of New York, Citibank, Danish Science Ministry, and the Economic and Social Research Institute (ESRI) of the government of Japan.

Professor Comin received his PhD in Economics from Harvard University in 2000. Since then, he has been Assistant Professor of Economics at New York University and Associate Professor of Business Administration at the Harvard Business School (HBS) where he taught both in the MBA and in executive programmes. He has also designed and led immersion programmes in Peru and Malaysia for which he received the Apgar Prize for Innovation in Teaching from the HBS Dean.